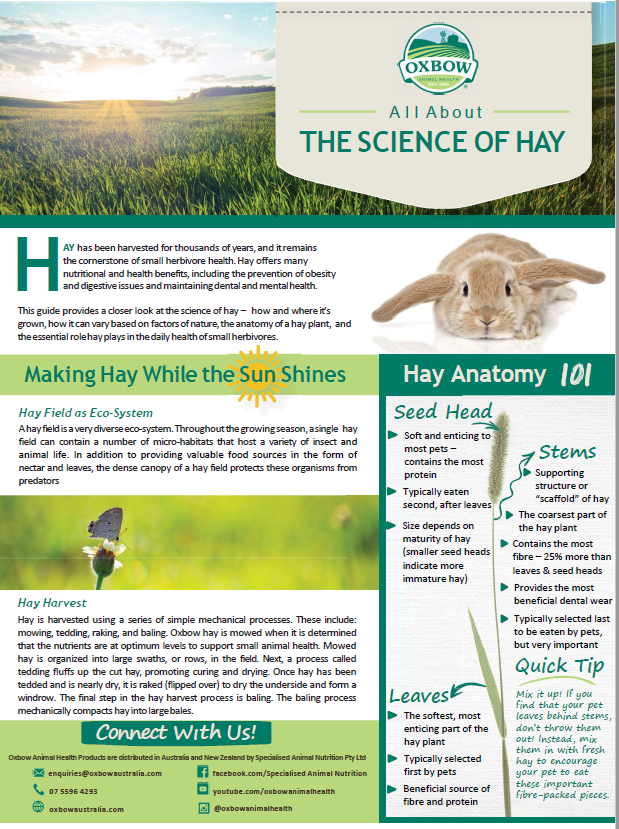 All About The Science of Hay

ALL ABOUT THE SCIENCE OF HAY

This guide from Oxbow Animal Health provides a closer look at the science of hay – how and where it’s grown, how it can vary based on factors of nature, the anatomy of a hay plant, and the essential role hay plays in the daily health of small herbivores. Hay has been harvested for thousands of years, and it remains the cornerstone of small herbivore health. Hay offers many nutritional and health benefits, including the prevention of obesity and digestive issues and maintaining dental and mental health.

MAKING HAY WHILE THE SUN SHINES

A hayfield is a very diverse eco-system. Throughout the growing season, a single hayfield can contain a number of micro-habitats that host a variety of insect and animal life. In addition to providing valuable food sources in the form of nectar and leaves, the dense canopy of a hayfield protects these organisms from predators.

Hay is harvested using a series of simple mechanical processes. These include: mowing, tedding, raking, and baling. Oxbow hay is mowed when it is determined that the nutrients are at optimum levels to support small animal health. Mowed hay is organized into large swaths, or rows, in the field. Next, a process called tedding fluffs up the cut hay, promoting curing and drying. Once hay has been tedded and is nearly dry, it is raked (flipped over) to dry the underside and form a windrow. The final step in the hay harvest process is baling. The baling process mechanically compacts hay into large bales.

Quick Tip: Mix it up! If you find that your pet leaves behind stems, don’t throw them out! Instead, mix them in with fresh hay to encourage your pet to eat these important fibre-packed pieces.

Hay is very much a “farm fresh” product. It is grown and harvested naturally, and minimally handled between the field and your pet’s preferred dining area. As a product of Mother Nature, even slight changes in factors such as temperature, humidity, rain and wind will cause the taste, texture, colour and aroma traits of hay to vary slightly from bag to bag, it’s all about the science of hay. However, it is important to note that a change in one of these traits does not necessarily indicate a change in quality. Some common ways that your hay might vary from purchase to purchase include:

Beautiful green hay is everyone’s first choice, but it’s important to know that brown or sun-bleached hay is not “bad” hay. Hay becomes brown as it matures and less light reaches the lower leaves through the canopy. Hay loses some of its natural green colour while drying in the field. While hay with alternate colour attributes may not be as visually appealing, the nutritional profile of hay is not affected by colour.

Hay texture varies naturally between varieties. Orchard Grass, for example, is typically very soft, while other varieties such as Oat Hay are coarser by nature. You will naturally notice some variability between bags of the same variety. Generally speaking, texture is an indicator of maturity. The more mature hay is, the coarser the texture will be.  To help you choose your pet’s preference, every bag of Oxbow hay features a taste/texture guide ranging from sweet and hearty to soft and crunchy. 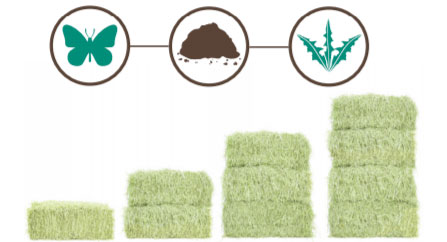 What’s In a Hay Bale?

Considering the vast ecosystems contained within a hayfield, it’s inevitable that some bales will contain small artifacts of nature, including miscellaneous plant life, dried insects or small rocks or bits of soil from the field. Purchasing hay from a trusted expert will help to significantly limit the amount of “foreign materials” encountered in the hay you purchase. Oxbow has an extensive Quality Assurance program in place and is always making process improvements. Oxbow’s production team members are trained experts when it comes to sorting and evaluating hay.

The Importance of Hay in the Diet of Small Herbivores 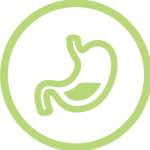 The fibre in hay facilitates the constant digestive movement that small herbivores require to maintain digestive health. Disrupting this movement can lead to a number of gastrointestinal issues, some of which can be life-threatening. Providing grass hay most closely mimics the foraging activity small herbivores would perform in nature. 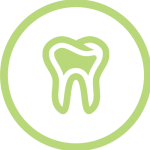 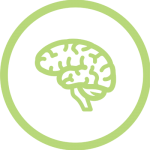 Hay is not just great for the body of small pets, it is essential to their mental health as well! Access to a variety of hay provides mental stimulation, keeping pets active, stimulated and healthy. To maximise this important mental stimulation, try placing hay in as many locations as possible through your pet’s living space.